“When Clint got released, it brought a situation where courage and reliance on God was mandatory. So, football or no football; I have courage to sit in peace in this season and that is huge.” -Matti Gresham

A woman of Christ, a beautiful soul, a sweet, yet bold champion for all the things she loves— her faith, her husband, her family and fulfilling her mission in life. Meet Matti Gresham, the wife of six year veteran and current free agent (formerly with the Seattle Seahawks), Clint Gresham. Matti strives to live courageously and create a life that is as powerful on the stage as it is behind the curtain.

Where are you originally from and how did you get to where are now?

I am from Lubbock, TX and lived there until I was 21. I went to school in San Marcos at Texas State to play Volleyball and ended up transferring to Seattle Pacific studying international relations. After college, I worked for a beauty company as their associate photographer. 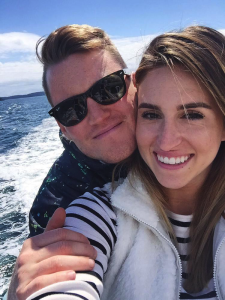 I met my husband leading Young Life in Mercer Island, WA. We were both volunteer leaders there and I met him at my first leader meeting. He had been leading for a few years before me. We started hanging out as friends and then started dating and have been dating ever since!

Tell me about your day to day?

Most days, I wake up and head to FlyWheel to work out. I work at Lululemon part-time right now while we are in transition. And if I’m not at work, usually I’m hanging with my husband or my girlfriends, running our dog Bear or working on my blog and business (mattigresham.com).

What are your fondest WAGS memories?

I would be ridiculous to not mention the Super Bowl. The SB that they (Seahawks) won was insane. Just seeing your man playing in such an epic game that you’ve watched since you were a kid, is crazy. They work all year to make it to that game and the fact that they as a team accomplished that dream was amazing to see. There was so much security, press, parties and functions, you name it! The stress before the game was unreal, but the fun after the win was epic. It’s a weekend that you don’t forget and that has to be the #1 fondest WAGS memory. 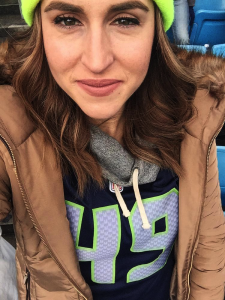 What is the hardest part about being a NFL Wife?

I think it would have to be how “out of control” things can feel at times. I can do my best to make our home peaceful and do all the little things but I can’t control his performance on the field, whether a team picks him up or not, whether a team cuts him or not, if we win or lose or if he is stressed. When you are married to a man with a traditional “9-5,” you at least have a little bit of a consistent guarantee but in the NFL, it’s a different arena. I’m a planner but the reality is that you may have to pick up and move at any time.

I really want to speak at women’s conferences one day and that is my dream. I started the blog as an avenue to get my content out, have an online presence and build my brand. I use stories from my life, things I’m learning about God and use transparency to connect with women all over the country.

What is your professional background and current pursuits?

I do freelance photography as well as write. I use my blog mainly as a platform to encourage women of faith by sharing my experiences and things I'm learning while I walk through life with God.

On Love & The Greshams

What makes the value of your Husband’s career worth the sacrifices that come with this territory?

What makes it worth it is seeing my husband use his platform to speak into people’s lives about Jesus Christ. He gets to walk in to a lot of open doors just by the nature of what he does for a living. But, his heart has always been to steward the life and the platform that God has given him in the best way possible. He really cares about God and people more than any career. Clint does such an amazing job of using this opportunity to bring people wholeness, encouragement and love. When we touch the lives of the people in our community in a positive way then THAT makes it all feel worth it.

What do you admire most about your Husband?

He has such a good heart. His integrity and character speaks volumes about the type of person he is. He has such a heart for the underdog− the kid who someone excludes– and that is who he always talks to and gravitates towards at Young Life events. The NFL can be a difficult place to be and I think he’s done a really good job at being a man of upstanding character when there are plenty of open doors to be just the opposite. Even before I met him, the stories I had heard about him, spoke to his integrity and his heart. 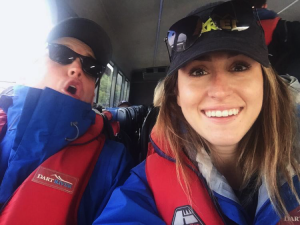 How do you remain secure in yourself and your identity when often your husband’s career may appear to overshadow who you are?

It’s very humbling. When you have your own career path and dreams you want to achieve, it can feel disheartening to have to put those on hold for someone else’s. I decided to support my husband while he is playing because I wanted to actually see him (our schedules would be completely opposite if I had continued in my previous job) and I wanted to help him play as well as he could for as long as he could. But it was a challenge to step away and be home, even if it was just for a season.

What was the turning point for you?

The first article I ever wrote on my blog was after I went to PAO (Pro Athletes Outreach) and met my hero, Christine Caine. She asked if I would write about my story in her magazine Propel. Around that time, I had begun to realize that having a job made me feel important and strong and without it I felt like people were judging me to be something I wasn’t. But with time, I stopped caring about if people were judging me because I knew that I was doing what was best for my husband and our family. I knew I still had goals and career dreams that I would fulfill. I stepped back and said “your success is my success” and that takes a humble woman to do that and mean it. I had to truly learn that my identity doesn’t come from having a “cool job” but it comes from knowing who I am in Christ. I can feel loved and important in every season, whether I have a job or not, if I’m rooted in that truth.

What word describes how you feel in this season of your life, right now?

Every year on New Year’s Day, I pray for a word going into my year, and this year, my word was courage. I used to care a lot about what people thought about me and in fact, I thought too much about whether or not everyone liked me. In the past, I would have the urge to sway on my convictions, bend a bit on what I stand for or agree with something I may not fully believe in just to not cause a “fuss.” But this year, I am trying to have the courage to be authentically me at all times, no matter what. Also, I’ve had to have genuine courage to trust God with our future. When Clint got released, it brought a situation where courage and reliance on God was mandatory. So, football or no football, I have courage to sit in peace in this season and that is huge.

Well, now for something less rigorous: a fun question for you!  What is something that you do in your home, that only you can? A little competition never hurt!