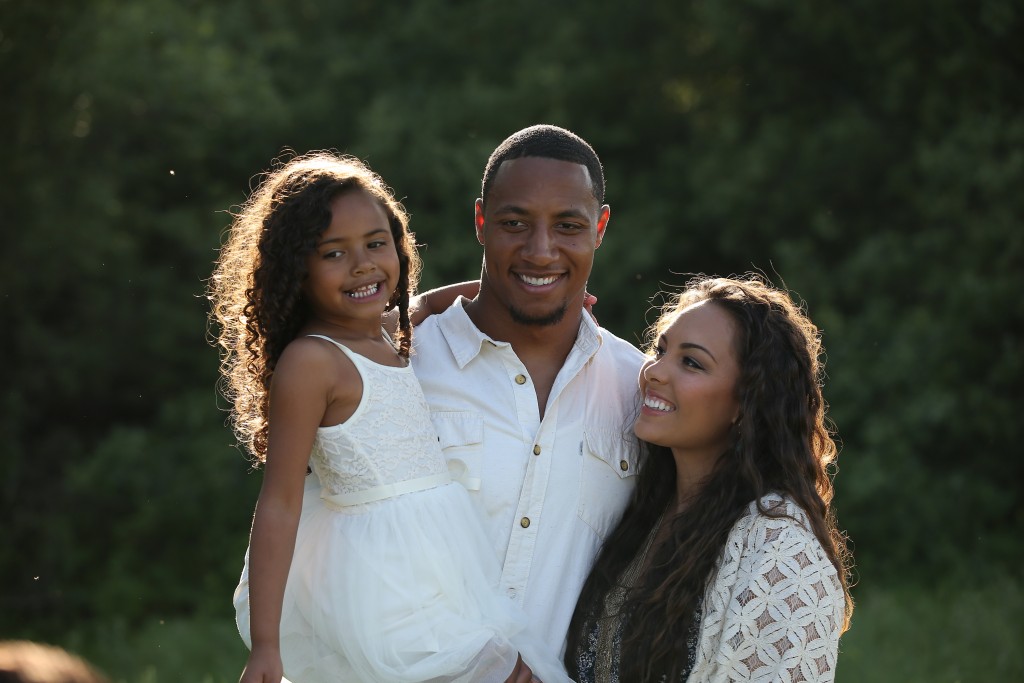 This week's WAG Feature is on Jaid Reid, wife of San Francisco 49ers Safety Eric Reid. Mrs. Reid is an incredibly sweet, down to earth, and private woman. I was honored when she agreed to the interview for WAGS Redefined. We discussed her personal goals, life in the NFL, and stereotypes of NFL WAGS. Read the interview after the break ...

I'm not a fan of being in the spotlight. My priorities are supporting Eric, taking care of Lani (our daughter), and making sure our family is good. - Jaid Reid

LM: Where are you from originally and how did you get to where you are now?

I was born in Cape Town, South Africa during the Apartheid. It was a crazy time, because I come from a biracial family. We moved often when I was younger: Portugal, then Chicago (dad's hometown), then New Orleans. My dad left when I was really young, so I don't have much of a relationship with him. We settled in New Orleans, LA where my mom raised my sister and I by herself. We stayed in the states because she knew there were more opportunities for us here. After Hurricane Katrina, we moved to Dallas, TX.

LM: Was your house damaged by Hurricane Katrina?

Our house was salvageable. It stood 6 feet off the ground, so it suffered minor water damage. We were fortunate compared to other people and our friends. My family never moved back to New Orleans, but I eventually found my way back to Louisiana for college where I attended LSU. I graduated the same year Eric left for the NFL draft and then we moved out here to California. My sister now lives back in New Orleans, and my mom has moved back to South Africa with her new husband and is loving life.

LM: How did you and Eric meet? What's your love story?

We met through mutual friends at LSU, but were both in relationships at the time. One day, at my friend's birthday party, we were talking and realized we were both single and became inseparable from that moment on. We married soon after we moved to California.

LM: What are some of the challenges of being married to an NFL player and what do you like about it?

I'll start with what I like. Eric's career has given us a platform to do a lot of work in the community. We are passionate about giving back. Recently, we've worked a lot with the Dreamcenter in Baton Rouge, LA, Eric's hometown. The NFL platform allows us to influence lives on a larger scale and to be positive role models in people's lives. It's crazy how many more people we can reach out to simply because Eric's in the NFL. I love that about it!

I think making friends has been a challenge for me. I used to be hesitant about disclosing Eric's profession because I thought people would want to be friends for the wrong reasons. I've since gotten over that and have found a really good group of friends here. Oh, and camp! Camp is challenging since Eric is gone for four to five weeks at the beginning of every season.

LM: What is one piece of advice you can give to other women that you wish you would have known prior to your husband getting drafted?

I would say embrace the opportunities that are presented to you by the NFL. Put yourself out there and don't be shy…because I was! I'm just now starting to take advantage of everything that the league has to offer. Do it while these doors are open, because it doesn't last forever. Make as big of an impact as you can, while you can.

LM: Do you believe there are any misconceptions of NFL WAGS? If so, what is your view?

Yes, I think that there are generalizations made about all NFL WAGS based on what the media portrays about a few. There is a stigma that NFL WAGS as a whole live superficial, materialistic, and sensationalized lives. Those women do exist, but through my experience, that isn't the case for the majority of wives, fiancés, and girlfriends. The ladies in the league that I'm friends with are some of the most humble and down to earth people I've met in a long time.

LM: What would you like people to know about you?

I'm a really private person. It actually took a lot of convincing by Eric to do this interview. This is Eric's career and I'm here to support him through it. I'm not a fan of being in the spotlight. I don't have a Twitter or Facebook account. I have an Instagram but struggle with posting photos, because I don't want people to know every detail of my personal life. I struggle with social media in general, because I feel like it's changing the world and not for the better. People are so vain these days. My priorities are supporting Eric, taking care of Lani (our daughter), and making sure our family is good. I guess if there's anything I want people to know, it's that being an "NFL wife" does not define who I am.

LM: What are your goals?

My family goals are to be a loving wife, to raise our kids with morals and integrity, and to give back to the community. It gets a little complicated with my career goals. I have a BS in Nutrition and Food Science and experience in the corporate world, but I'd like to do something in a more creative atmosphere. I mentioned earlier that I like art, so I've recently started taking classes at Cal State Berkeley to explore that path.

LM: What are you most proud of?

I think I'm most proud of being a first generation college graduate. My mom and dad didn't go to college, neither did my grandparents. My family was incredibly proud of me, so it made me feel really accomplished. I'm also so proud of Eric for being such an amazing dad and husband. He has a different mindset and outlook on life than most people his age. I'm really proud of the man he is and the family we're building together.

LM: What are you passionate about?

I'm passionate about serving God by helping those in need. Eric and I are on a mission to do something bigger than ourselves. We are not only involved with the 49ers community events, but with personal ventures like the Baton Rouge Dreamcenter. Eric and I have teamed up with Healing Place Church to renovate the Dreamcenter, a facility that will help people for years to come. In its completion, this 45,000 sq. ft. building will house women and children, feed the hungry from its industrial-sized kitchen, provide after school programs for at-risk youth, and hold Sunday services. It will be a place to teach values and rebuild broken lives. It's a blessing to be able to bless others.