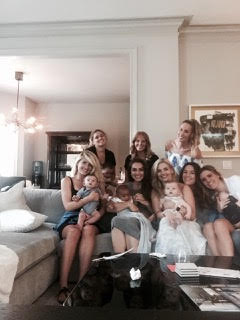 So, I am not going to lie, it's 5:39pm and my deadline is 7pm TODAY and clearly I have been putting this one off because... well...camp. I usually plan ahead what I am going to write about because you know, after all- special people such as you are taking time out of your busy life to read what I have to say so I at least owe you that to plan what I am going to share.  But, today again (because we aren't lying to one another) I had no idea what I was going to write about until I opened up my blank document and the thoughts started to flow.  Granted, two hours and twenty minutes before kickoff of preseason game #2 and an hour before my house was filled with all of the lovely ladies that I am lucky enough to do this crazy world of football with.  And that is when it hit me; I am going to write about the power of community and why it is so last year to be mean, judgmental, and quite frankly appear “too good” for the other women that are living this NFL life WITH us.

Ok, I am going to put this out there: there is hands down NOTHING more intimidating than the first day you roll up to your significant others training camp and look around at all of the insanely gorgeous women. If you are anything like me; my first day coming to Rico’s camp three years ago, I truly started to wonder how the heck I was going to make friends, let alone fit in. There are so many stereotypes of what a “WAG” is supposed to be; how we are supposed to act, dress, look, etc and prior to getting to know anyone- I believed what I had heard.  I believed that everyone would be stuck up, I believed that everyone would have more money than they knew what to do with it, I believed that this industry could quite frankly have the potential to change me for the worse and I was scared.

Obviously, I was SO wrong. I have met some of the most amazing women and I truly don't know where I would be in this crazy world without them. Rico and I have been fortunate enough to be with the Falcons for three years so I would say that I now am one of the women who could potentially be intimidating to someone new to the game.  Having said that, I promised myself three years ago that if we were lucky enough to be here for a length of time, I would do my absolute best to make others feel welcome- in whatever way that I could. 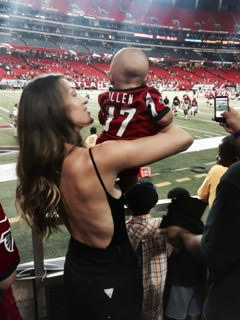 All I can say is this; take the chance and reach out, introduce yourself to somebody new or invite everyone over for pizza and wine to watch the game when the guys play out of town.  You don't have to become "besties", but the truth is that we can all use someone to do football season with and being a mean girl is so last year.