I know you think that your countless hours spent on XBOX Live or Ps4 give you credentials to be an expert in professional sports, but it doesn’t.

The Mistress The infamous mistress. She has been the star and co-star in countless movies, sitcoms, and novels including the beloved Olivia Pope from Scandal. She appears when the husband is at his highest point in his career but at the weakest point in his marriage. He is feeling himself and eagerly searches for something to occupy his time. They strategically plan meetings to avoid their relationship being discovered. The mistress knows her role and no matter how long the affair lasts she knows that the chances of him leaving his family is slim to none. She stays in her place because she wouldn’t dare compromise the arrangement by telling the wife. The mistress knows that her existence completely depends on the existence of the marriage despite the fact that he may genuinely love her, and therefore she is content. If the affair was ever discovered, the mistress never confronted the wife as if she was privileged to do so. She accepted her fate and if necessary moved on to the next one. Husbands initially deny the relationship but after stack piles of evidence they inevitably admit to some but not all indiscretions. Some wives forgive and move on while others cannot accept it and seek divorce. 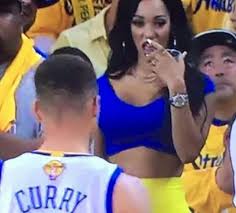 This is the storyline we have known for centuries but somewhere along the way the mistress became vintage and was readily replaced by the side chick. Unlike the mistress, the side chick is bold, aggressive, and careless. She has little notoriety and as a result boasts about the relationship to become relevant. Men don’t accidentally meet side chicks. These women develop strategies to meet athletes and celebrities so they can claim their stake. Whether they are sliding in DMs or popping up in VIP sections in the club, the new age side chick is calculated but far from loyal. She often has multiple “ballers” in her call log that have no idea that she’s sending the same message to his teammate. The end game is not to be with the man but to use the man to get ahead. She is often reckless seeking married men like it is a sport. She will readily confront a wife as if somehow the wife stole her man. She lives for the incriminating screenshots and anxiously waits to press send. With the rise of social media, wives are forced to keep their profiles private to prevent the side chicks and the side chick wannabes from creating havoc in their lives.

Married women obviously have no interest in dealing with the mistress or the side chick. However, wives are genuinely puzzled as to why being a side chick is a #goal. From posting comments on social media about sleeping with somebody else’s man, sliding in his DMs when he is in your city, or showing up to his game with tickets received from a homeboy who is trying to “put you on.” What is the point? Is it winning when someone can say that they have had some type of relationship with a successful man that just so happens to be married? There are situations in which women are unaware that they are in fact the “side chick” but those situations are rare. Some of these women who have made a career out of being the side chick even lie about relationships with the goal of ending marriages.

In a time where women use the allegations of being a side chick to catapult their career, what does that mean for the wives? Wives are on guard, ignoring the white noise, and most importantly staying prayed up. The men involved are just as guilty primarily because they are the ones who made the covenant of marriage, but I’m hard pressed to say that men couldn’t cheat if they didn’t have anyone to cheat with. If the goal is to be the side chick with hopes of inevitably becoming the wife, just remember the old saying “how you get them is how you’ll lose them.”

For information on how to start a business or non-profit, email me at tpatterson@definitivesportsrepresentation.com.